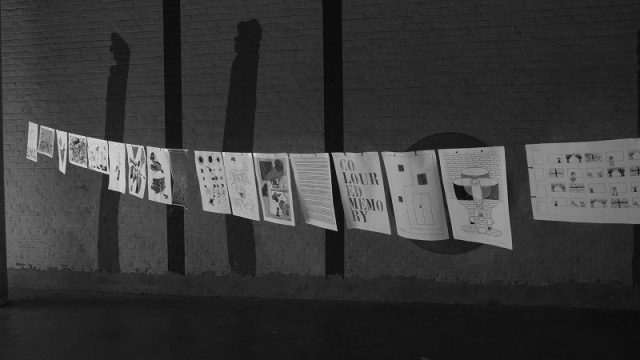 ILYA PRIGOGINE IN KLEUR was the title of a public intervention that took the form of a participatory, public exhibition held in a public colonnade in Ghent during the NOVGOROD ART FESTIVAL.

The exhibition “ILYA PRIGOGINE IN KLEUR” brought together over 50 Belgian Based artists … and public.

Every artist was asked to create one to three colouring pages inspired by the work and the person of ILYA PRIGOGINE, the Russian-Belgian Nobel prize winner in chemistry (1977), while still remaining true to their personal art practice.

After which all the colouring pages were reproduced and offered to the public at large … to colour and complete them. A possibility to trace, colour, adapt, transform the work of a contemporary artist and indeed participate in its creation. Once coloured they were exhibited at the colonnade.

Furthermore, a limited edition of 178 was produced together with TOPO COPY (link) which brought together all the colouring pages that were produced by the participating artists. It’s the private, participatory part.