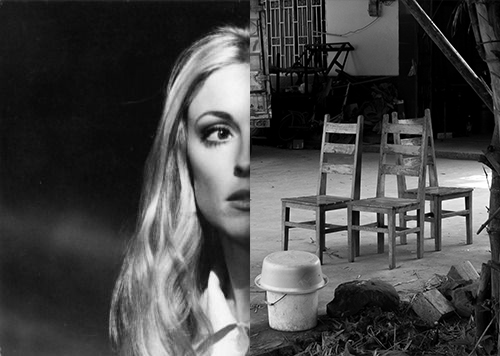 13Chairs is a series of works commissioned by Ben Benaouisse and shown at the new SANTO center (Gentbrugge, Belgium) every thirteenth day of the month starting Saturday 13.1.2018 and ending one year later on Sunday 13.1.2019.

Mortier’s artistic practice departs from the inevitability that art is a relational process in constant need of completion™ which wittingly draws more attention to what is not there than to what is. Nothing is only noticeable in juxtaposition to something.

When Joseph Kosuth described his seminal work “one and three chairs” in 1970 he said “I used common, functional objects – such as a chair – …”. Placing his work well centred in the now. The chair had only started to become common about four centuries earlier. In the time between the Egyptian and Chinese ancestors and the 16th century chair the words common and chair had no place in the same sentence unless it was a clear negation. Very much like the use of photography in art, which has only become common in the 53 years since Kosuth made his “one and three chairs”.

In 1964 Andy Warhol made his first “Electric chair” as part of his “Death an Disaster” series testing his hypothesis that ‘‘when you see a gruesome picture over and over again, it doesn’t really have an effect’’. Early critics said he undermined the critical ‘integrity’ of art but later criticism contradicted this and suggested the opposite, namely that Warhol brought viewers back into contact with the events themselves despite the repetition of images in the media.

With Fat Chair – created in 1964 and encased in a glass, temperature-controlled museum display case – Joseph Beuys tried to oppose the “rational” in contemporary society. The work became a composite, open-ended metaphor for the human body, its impermanent condition, and the tendencies for social life to conform to constructed convention. Fat Chair subsequently underwent a slow, natural process of decay until 1985, by which time the fat had almost entirely decomposed and virtually evaporated.

T.V. Chair, 1968 (‘73, ‘74), by Nam June Paik is a playful treatment of the reception of television. The work is a chair where the seat has been replaced by a plexi and a television set placed directly underneath. There’s a clear reference to the pay tv-chairs that populated waiting areas at bus stations and airports in America during the 60’s-80’, except Paik’s chair is not to be sat upon and its television is not to be watched?

At the 2013 Venice art biennale, Ai Weiwei installed Bang for the German view at the French pavilion. The installation was comprised of 886-three legged, artisanally crafted wooden stools in an expansive rhizomatic structure. After his return to China in 1993, Ai Weiwei started researching the cultural and artistic traditions of his native land – something that was prohibited since the cultural revolution. As a result he began integrating customary objects and furniture pieces into his own practice as a means of addressing the export of cultural values and historical knowledge in the context of art.

Between 1948 and 1952 Magritte produced several versions of “La Légende des siècles”. The components and composition always remained the same: a wooden chair stands on the seat of a massive, stone chair construction. The work was a tribute to Victor Hugo’s epic poem with the same title, an immense depiction of humanity’s history and evolution. Hugo wrote it between 1855 and 1876. The poems were published in three series in 1859, 1877 and 1883.

In 2012, at the Istanbul Biennial, Doris Salcedo stacked “1550 chairs between two city buildings”: “Evoking the masses of faceless migrants who underpin our globalized economy.” The chairs piled in disarray on top of each other towered over passers-by like a small building.

Inspired by a culture show on “La Liberté guidant le peuple” by Eugène Delacroix, Luc Deleu started to reflect on the concept of a barricade in art. After Barricade # 1 (concrete, wooden slats & doors) and Barricade # 6 (books) he made “Barricade # 3 Nuit debout” (2016): a barricade of Rietveld chairs – or, what would a barricade look like in the better off neighborhoods? -, with a subtitle referring to the citizens’ protest movement that repeatedly occupied the Place de la République in Paris that year. All of them are obstacles, obstructions, barriers made from the residue of our contemporary society.

Bruce Nauman attributed the inspiration for “A cast of the space under my chair 1965-8” to Willem de Kooning:”If you want to paint a chair, don’t paint the thing, but paint the spaces between the rungs of a chair”. The object gives a normally unnoticed, intangible space a real physical existence.

The difficulty is not finding a chair, but deciding on which chair while delving through the abundance of options in David Hockney’s work: Number One Chair (1985-6), Walking Past Two Chairs (1984-6), Two Pembroke Studio Chairs (1984), A Picture of Two Chairs (1985-6), The Perspective Lesson (1984), … still ‘Chair’ (1985) stands out as a photo collage of a chair seen from different perspectives, with different light and shadows. The result breaks with both the rules of proportion and linear perspective. It can be found in the 41-page essay Hockney assembled for the 1985 December issue of Vogue in which he writes on ways to disrupt long-held conventions of perspective in Western art.

“In 1913,” recalled Marcel Duchamp, “I had the happy idea to fasten a bicycle wheel to a kitchen stool and watch it turn.”1 The result, Bicycle Wheel, is the first of Duchamp’s readymades—objects (sometimes manufactured or mass-produced) selected by the artist from and designated as art. Most of Duchamp’s readymades were individual objects that he repositioned or signed and called art, but Bicycle Wheel is what he called an “assisted readymade,” made by combining more than one utilitarian item to form a work of art.

When the American video artist and communication theorist Paul Ryan was showing at dOCUMENTA(13) he was asked “What are you working on now?” Ryan answered “I’m trying to imagine what it would be like if every member of the human species knew how to three.” The interview was printed in his artist’s notebook “Two is not a number”. His answer referred to his long lasting work on “Threeing: A formal collaborative process in which two against one dynamics are precluded, a yoga of relationships for three.”

As 13Chairs was a one year setup, there are but 12 chair installations by mortier himself.
The last instalment is the “#13th Chair” and are all the chairs curated in the public domain by the public at large.
During the exhibition on January 13th, 2019, the 13th Chair was the chair of the attendant.

13Chairs is a series of series with a number of limited editions.

“chair for the other”

“chair to look at through a spyhole”

“out with the old, in with the new”

“TPTB, TPOT (the powers that be, the power of three)”

Editions (of 3) per installation/