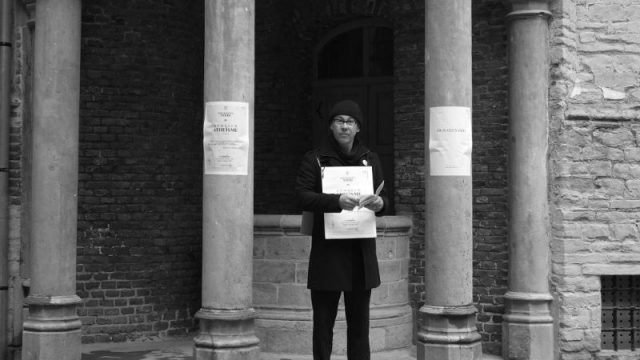 On 25.3.2015, I commemorated the expulsion, from Oxford University, of Percy Bysshe Shelley & Thomas Jefferson Hogg on 25.3.1811. As they had written and distributed the pamphlet The Necessity of Atheism. Shelley would reprint the pamphlet in an expanded version as a footnote to the sentence There is no God from his philosophical poem Queen Mab in 1813.

As I found no existing translation of the pamphlet in Dutch, I decided to translate both versions, 1811 & 1813, as well as produce a more modern version where I merged both versions.

This last version was read out to a live public during the art festival Tumultingent (Ghent, Belgium) on the courtyard of KASK, School Of Arts Ghent, in the shadow of St. Bavo’s Cathedral.

Free booklets with the translations were offered to the public all day long.

And are available as pdf here.