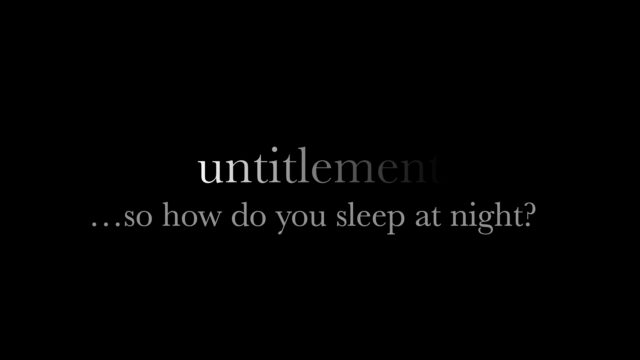 Untitlement is a 13′ video piece addressing entitlement as the birth defect we get bred in.

From the exhibition text at Kummelholmen, Stockholm, SE: “When Francisco de Goya completed his painting ‘The third of May 1808’ he broke ground in the depiction of war and more specifically the horrors of war. The work had no precedent. De Goya sought to commemorate the Spanish resistance and drew on both high and popular art. Ushering in the modern era, the content, presentation and above all emotional force of the work was, in short, a slap in the face. Thierry Mortier’s video piece ‘untitlement’ does not seek to commemorate. It’s a timely testimony. Timely in execution, drawing on both popular – even commercial – and high art. Oil paint is replaced by layers of texts, images and sounds to build a thick texture of emotion that doesn’t allow the viewers a single moment to catch their breath. Because, honestly, there is no more time to catch one’s breath in today’s media overloaded infotainment era. The narrative of ‘untitlement’, triggered by a very concrete event, namely the murder of George Floyd on the 25th of May 2020, quickly speeds away through an interconnected web of global disquiet that crosses all borders. ‘Untitlement’ is not a slap in the face, it is an unapologetic punch in the gut.”