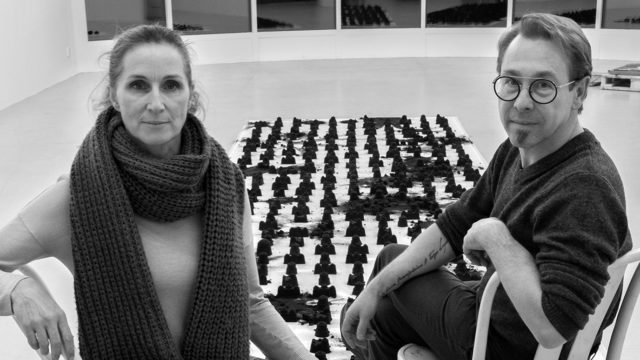 Recent events in Sölvesborg (Sweden) were aimed to lay strategic foundations on a municipal level to install a firm base against the Swedish Kulturpolitik mål that was decided on state level. Left unchecked this Sölvesborg-thinking would have all the time to grow until the next elections in 2022 – it has already begun spreading – when SD/KD/M take over. The free art world as we know it will be fundamentally changed and everyone will feel the impact: the institutions, the konsthall, the theaters, the houses of dance, the art schools, the off spaces, the artists, the art lovers and art-enthusiasts… but also the entire general public.

Where Sölvesborg 2019 was the start of the new “Entartete Kunst”-thinking in Sweden, the exhibition DES- was but the start to formulate answers through art. The exhibition was a collaboration between Anna Edsjö (SE) and Thierry Mortier.

The public was asked to destroy 429 Black ink Sand castles for a small fee to sponsor a bus Stockholm-Sölvesborg-Stockholm in order for artists, art lovers, art enthusiasts to go to Sölvesborg for a Silent Protest March. They could already claim their protest poster for the protest signs and sign the open letter to Sölvesborg for publication.

More images and videos in the FB event posts here.

The open letter in English as presented in the exhibition OpenLetterENGA3